My prediction for the 2013 Exodus International catch phrase:

"The Opposite of Homosexuality is Gummy Bears."

Why? It's simple.  Every few years, Exodus International changes its slogan for a variety of reasons probably attributed to marketing, however, I think one of the main reasons is their nagging consciences.  In the early years, Exodus claimed that they could change anyone from being homosexual to heterosexual.  Over the years, countless people have come forward, not only claiming that their orientation was never actually changed, many came forward talking about the harm they experienced going through homosexual reparative therapy.

An early snapshot of the Exodus website makes this claim.  Can you change, the answer is YES! 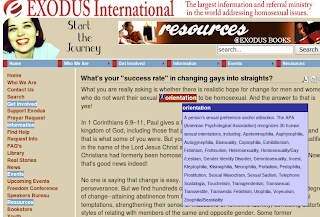 In the last decade, studies came out that showed the actual ineffectiveness of such treatment for people who would describe themselves as homosexually oriented.   Exodus published their own press-releases, one of which includes a claim that they have a 53% success rate!     However when asked later that year, they cite another study conducted by Dr. Warren Throckmorton of Grove City College, to back up their claims.   The report is linked here.   However if you dig into the study itself,  you see Dr. Throckmorton did not conduct the study at all, but rather is citing a study put out by Spitzer (2001), where he calls the study the most recent study of reparative therapy to date.  But this study does not show a 53% success rate, as claimed by Exodus International at all:

Spitzer (2001) reported that 46% of the men and 42% of the women assessed themselves as exclusively homosexual in the year prior to change. Regarding postchange efforts, 17% of his sample of men and 54% of the women reported exclusively heterosexual attraction.

So to put it bluntly, of the percentage of people who decided to participate in this study, 17% of 46% of the men have shown a change from being gay to straight.   That is about 7%.   And 54% of 42% of the women show the same change, and that would come out to 22%.     I am not even going to go into whether or not these cases were actually successful, because one year of study does not show a change to someone's sexual being, however, these numbers most certainly do not add up to 53%, not by a long shot.

So in addition to these mixed messages, Exodus offers another answer to their success rate:

What is your success rate? The answer never really was a WHAT. It always is a WHO. Jesus Christ is “success” because He was obedient to the Father’s plan. When we find our identity in Christ and not in our own strengths or weaknesses, we too can find success in living. Not perfection, but perseverance. Not absence of temptation, but freedom from feeling we have to give in. Not a guarantee by following rules, but genuine hope empowered by grace.

Now, there is a lot in this statement I very much agree with and can relate to, but not in regards to sexual orientation.   Why are they charging so much money, to help people do what they can do for free?  Develop a relationship with God, no?  Then why go to Exodus?  Oh, because they can help change you… but wait, they aren't that successful at it.  So why do all these people participate?!

Exodus decided to clean up their act and change their message again, to say "The opposite of homosexuality is not heterosexuality… it is holiness."   Flip that around, and it says, "hey, are you gay? guess what.  the opposite of holiness is your sexual orientation."    Nice.

But there is some wisdom to this catch phrase, because it removes from themselves the claim that they can change your orientation, but rather, can help change your behavior.   Which yes, I believe anyone can change any behavior, and anyone can learn to do anything, or not do anything.   The question is: is it beneficial?    The subtext here is, while you may still be gay, we'll help you not act on it.

But wait, there is still more to this story!   Exodus has AGAIN changed their catch phrase.   We can now learn that the "Opposite of Homosexuality is Holy-Sexuality."   Are you as confused as I am?   So they can't change people completely from being gay to straight, so they're going to work on the holiness factor, which for the majority of participants is abstinence and celibacy.  But now, they're claiming to change people from homosexuality to holy-sexuality.   Exactly what orientation is that?  Well, I guess according to the teachings that Exodus International follows, in the modern evangelical movement, we find that the only "holy" sexuality is heterosexuality within marriage.

But at the end of the day, these catch phrases make no sense.  "The opposite of homosexuality is… " basically is a guarantee, or a service offering.   Whatever comes after that sentence, is the promise Exodus makes to its members.   However Exodus cannot deliver a consistent service offering, so they change the catch phrase, to things completely unrelated to the first part of that sentence, i.e. the  state of the people who arrive at Exodus for help.   They would do better just sticking random words at the end of these catch phrases, and at the very least be able to deliver something to its members: and I want to suggest GUMMY BEARS!

By offering gummy bears, to gay and lesbian people who come to Exodus for help, they can at least deliver something tangible, and real.  They are cute, and they are chewy.  It's something you can really sink your teeth into.   I believe, if Exodus did change their catch phrase to what I am suggesting, they could at least be an organization of integrity, that will not leave their members psychologically harmed, and their hopes destroyed by false promises.    Because they position themselves as an organization of spiritual authority, they can at least rest in the fact that, by delivering what they promise, they will not leave thousands of people at a crossroads with their faith, and their view of spirituality as a whole.


Ultimately, gummy bears taste much better, and are a lot more digestible than what they are offering today. 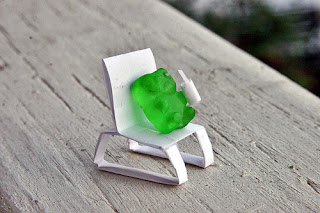