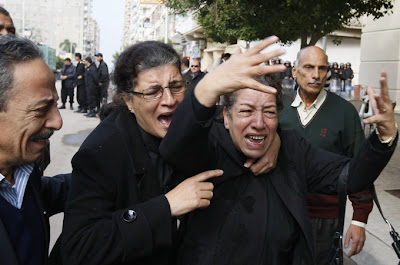 I wanted to take a break from the normal flow of conversation to draw attention to something currently happening to our people in Egypt.   Early on New Years Day, not even an hour after the turn of the new year, a suicide bomber detonated an explosive outside a Coptic Church in Alexandria, as the church was letting out for the New Year's Eve liturgy.   Twenty-one people were killed, and scores were injured.  Why did this happen?   Many people think it is linked to the recent decree by Al-Qaeda, promising violence upon Copts and Chaldeans in their home countries of Egypt and Iraq respectively, as well as throughout the diaspora.   This threat was in response to the supposed captivity of a Coptic woman by the church who supposedly converted to Islam.

It is clear that Christians in Egypt do not have the same status as Muslims.  However I do not believe it is a problem between religions, but rather an issue of power from certain radical groups, unfortunately, such tragedies bring further division brought out by fear and the need for survival.   There is an inequality and a huge injustice, by the mere fact that a Christian can convert to Islam peacefully, but a Muslim converting to Christianity can result in death for one or more parties.    The government of Egypt is doing little to protect equality in the country, and as a result, incidences like what happened on New Years Day will continue to occur.

I just wanted to create awareness, because there is injustice happening in the world, and the more people are aware of this injustice, the more we become accountable to each other, hopefully resulting in a greater opportunity for peace and community.   This is sad time for our people, and it breaks my heart to know this is happening to my brothers and sisters out there.

For more information on the attacks: